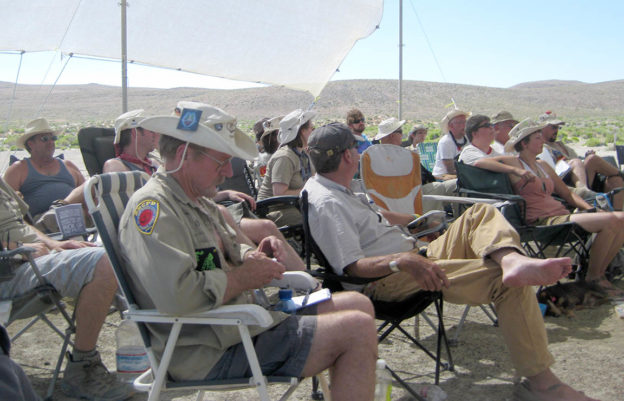 In an effort to demystify the process of becoming a Ranger, I’ve asked a number of second-year Rangers to share some of their experiences with you. My question to them was, “What would you like this year’s Alphas to know about what it’s like to become and be a Ranger?”

Here are some thoughts from Ranger Boxes:

I want to thank all of you for your interest in joining the Black Rock Rangers. The continued effort of all the rangers, new and old, is what keeps this group going.

A year ago I was sitting at my desk reading all those Alpha emails, that you all are probably seeing and reading, and I wanted take a moment to share my experience in going from the “desktop” to the “Playa-top”.

Overall, I have been burning since 2006 and every year until now I have camped with the Lamplighters. While working as a lamplighter my understanding of the city layout was extremely important to the success of my team. This knowledge of the city layout was extremely valuable on my first ranger shift, when we were called to a camp. My partner and I were given a destination for a camp that we needed to respond to and it was my ability to quickly locate myself in the city to realize that we we only a couple hundred yards away. I highly recommend that you are confident in your knowledge of the city layout because your mentor will check.

While with the Lamplighters I also gained experience with leading people and that includes making sure no one is left behind. When you go out on your mentor shift, remember that you will have a partner(s) and that it’s not all about you- your mentor will want to know you understand that point.

Next, I highly recommend that you just be yourself on your mentor shift. By pretending that your something that you are not, you are lying to yourselves, your mentor and the citizens of the city.

Lastly, there a some of you on the list right now that may not make the final cut following your mentor shifts, please do not let this discourage you from our great city. I get a lot of joy from being a ranger, but being a ranger would be nowhere as cool if we did not have the city to ranger in. There are many other areas to consider volunteering in, like the Post office, lamplighters, center camp, greeters, ect. In my opinion the cool thing about the Burning Man project is how well and efficient the city runs, many different pieces working together to create an awesome experience.

I had been a Burning Man participant for six years before I finally got around to the task of becoming a Black Rock Ranger and I’m really glad I finally did it. Overall I couldn’t be happier with my experiences within the Rangers, each and every person in the org I’ve had the chance to work or talk with has been a pleasure. There are some crusty personalities, but they’ve often got the best stories to tell, so keep your ego in check, your ears wide open, and you’ll make some friends.

I’ve got three chunks of advice for you on your journey to Kakhi:

Lastly, an observation. The most surprising thing about Rangering for me was that I expected to feel like I was ‘missing out’ when it was time for Ranger shifts. That somehow I was ‘going to work’ and leaving burning man behind. My camp mates thought the same thing and often said “sorry you’ve got shift, we’re going dancing!’ as I left. I’m happy to report though that being on shift is just as much, if not more, fun then not being on shift. Your mileage may vary, of course, but I saw more of the city with my partner while on shift then I ever have before. I met hundreds of more people on shift then I ever did as a participant. There is a big place for responsibility as a Ranger, but always remember you’re there to have fun too. Approach Rangering from that perspective and you’ll have an awesome time.

I nearly bonked mentoring because I couldn’t manage to tell where I was at any given time, no matter how many times my mentors asked me my whereabouts. What was really going on was 2 things. 1) I was feeling extremely self-conscious which made it hard to pay attention to what was going on outside my skin (and as we say “it’s not about you”). 2) I had had a habit in my day-to-day life of frequently assuming that whoever was with me probably has a better sense of direction than I did and relying on them to know where we were.

The solutions to those turned out to be 1) telling my mentor the moment I realized what was going on that I was feeling extremely self-conscious and nervous and just taking a moment to clear my head. My ability to be honest like that was one of the things that really saved me in the final call. And 2) realizing I’d been discounting my own situational awareness and taking a passive role on a regular basis and, well, stopping that and friggin’ paying attention as though it mattered.

The truth is that this issue would have been a fine reason to bonk me. I was prepared for it and would have understood completely. The upshot as I see it is this: knowing what you need and taking care of yourself (getting acclimated, studying a map, communicating honestly) is an important part of being there for others and ultimately having it be “not about you”. As a fine Ranger I know puts it: if the air masks drop from the ceiling, apply your own first before attempting to help anyone you are traveling with.

Ranger Miss Ginger has some suggestions:

Prior to becoming a Black Rock Ranger, I had been doing TTITD for about 10 years, where my participation consisted of doing many different theme camps – fro. the huge theme camp with over 60 people, to just a small group of 5. So in 2009, I came back after taking a year off and decided that I wanted to give back to this fantastic event by volunteering as a Black Rock Ranger.

Because of car trouble, I ended up arriving at BRC a day late and not having a day to acclimate before my “tryout” mentor shift (which ended up being with Fuzzy). I thought I would totally blow my chance at being a ranger during this mentor shift because my brain felt literally fried (it takes me a day or two feel normal once in the Black Rock Desert). Turned out it was probably the best thing that ever happened to me, because instead of trying to prove to Fuzzy and myself why I’d make such an awesome ranger, I just listened to him and his experience and his expertise, and took it all in.

The best advice I could give to any Alpha would be to LISTEN to your mentors during your shift – they have valuable input and experience – that’s why they were picked as mentors in the first place! I can say that now when I’m on shift, I don’t go looking for things to “ranger”, but I am there to help – and oh yeah – working the perimeter of the man on burn night is THE best. After 10 years of TTITD, I can say that I probably became a little jaded. But watching the burn form the eyes of the participants (first timers & old timers alike), was a fantastic paradigm shift for me – and that gave me an even more renewed appreciation for what we all spend a week (or much more) of our lives doing each year.

I walked onto my mentor shift with a few things set in my mind about how I was going to do it and as you can tell, there was a reinforcement of those beliefs. As a result I am going to share and expanded on the following things: this is not a test though it is a test, burning man is about having fun, and no matter what, you is the best thing you can provide. Please take the following information in context of your own limits and abilities because no matter what you can provide to others in service to your community, your limits need to be seen and understood by you and your partner.

This is not a test, though it is a test: In a special way the mentor shift is a test to see if you are a good fit for the goals and principles of the BRC Rangers. But this is not a typical test like you would do for a fire dept or a final exam. If you behave as if you are being tested then you will be seen for that and the results of the mentor counsel will reflect that point of view. The best way to test for this is to act like it is not a test. Be yourself and all yourself. Don’t worry about the results. I went to my mentor shift with the idea of “I get to do this thing that I want to do, and so I will do it to the best of my abilities.” If you make a mistake, others will support and correct you. The best thing to do is be you. Burning man is about fun: Fun takes many different shapes and sizes and the goal of much of the Black Rock City population is about having fun for that week in the desert. If you go to your mentor shift with the idea of having a good time, then it will be just that. My mentor shift was a fun time of getting to know new people, seeing the sights and wandering around. Make sure you have everything you need to have a good time, including food, water, sun block, a cool costume, etc. Also the “not a test” will feel more like not a test if your goal is to have a good time.

You are the best as you are: Be yourself! Don’t be who you think your mentor wants you to be, just be you. If you need to sit in some shade, make the need known because that is part of you. Need to stop and eat, inform and do. If you are not taking care of you then you can not be you, so just be yourself. Yes there is a dress code (as in please cover your bits but do it your way). The BRC Rangers are wanting and looking to add you, nothing more or less.

I went to my mentor shift with the goal of having a fun day and enjoying the playa. Yes, I wanted to be a Ranger but my first goal was to enjoy my time. Because of this I felt free to “ranger shade”, make funny radio calls and interact with the other participants. I drank my water, made my needs known and enjoyed myself thoroughly. Because of my keeping this and my training in mind is the reason that I was chosen to don the hat. Remember that this is an obligation as far as you wish it to be and as such, have fun with being a help and pleasure to your community.