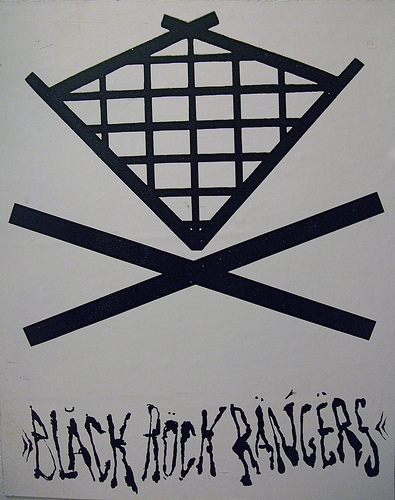 A bit of history about the service pin ceremony from Ranger Big Bear:

When we instituted the Ranger pin ceremony a few years ago, I adapted the Oath of Office pledge from Texas and the Texas Rangers to Black Rock City the Black Rock Rangers. I read this “swearin’ in” ceremony at our pin giving out ceremony, probably the last one where we were able to muster as a total assembled group. The year was probably Burning Man ’99. It’s no longer used, but I’ll share it now:

This pin certifies that the recipient has consistently demonstrated the true spirit of the Black Rock Rangers, has begun to master the ‘Art of Rangering’, has earned ‘the Khaki Dot’, and is therefore duly entitled to enjoy the many wonders of being a Ranger in Black Rock City and an important and constructive part of the Burning Man Project. May this rightful honor serve to provide access to the great bounties of our unique community, dutifully earned by a true protector of the Black Rock Desert and the citizens of Black Rock City.

Leave the “true protector” sentiment in place and sub-Texas for Black Rock and you’ve got a little taste of the history of the Black Rock Rangers.

Here are the years and their respective colors:

Ranger @pparatus describes the background of the Toaster Pins from their 2008 introduction:

This year all Dirt Ranger shifts will be scheduled for 6 hours throughout the event. Yeah. We are taking this risk eyes-wide-open with faith that it is the right move for the well-being, effectiveness, and longevity of the Rangers.

To make this work we need more Rangers and we need every single Ranger’s help to get there.

We all agree that compromising on the caliber of new Rangers is absolutely not an option. Some of our best Alphas are going to be people that we already know that “get” the event, “get” our community, and have the temperament and skills that make good Rangers. This year we challenge every Ranger to recruit at least one “Ranger that we haven’t found yet”. To make this fun we have a plan.

I’m dead serious. It used to be that if you brought a friend or family member to the bank to set up a new account the bank would give you a toaster. This year we are making metal pins in the shape of 50’s style toasters with toast popping out of them and a Ranger logo and 08 on the side. A Ranger gets one of these pins when someone they recruit passes Mentoring.

Here’s how it works: Every Alpha that becomes a Ranger will be asked who recruited them. That shiny new Ranger will be given a toaster pin by the Mentors (they are in cahoots on this one). The shiny new Ranger gets to go find the Ranger who recruited them and give them the pin … and there will be much rejoicing. They don’t get to keep it, especially since it is likely that people will ask them year in and year out who they “earned their toaster” for and, as the saying goes, you can’t toaster yourself. If you recruit multiple people that pass mentoring you get multiple toasters. I personally hope to earn a couple this year.

Change is constant. Burning Man is no exception. The growing pains and the challenges that we face together have been discussed in encyclopedic detail on Allcom. The fact is we have some flagging spirits and some skeletal shifts and the two are directly connected but, I never cease to be amazed at the abilities of my fellow Rangers to find and meet the needs of our community. Now is the time to make a concerted effort to take care of each other, to make sure that we really have each other’s backs out there by finding enough of the best people to be with us riding the edge of chaos. It’s time for the Rangers to inhale … and do it with style.

Ranger Flint describes the suggestion of the Shiny Penny Pins.

Reading through the feedback from first-year Rangers, a message of, “We’d really like to have our first and possibly our second shift with a more experienced Ranger.” With that idea, I began thinking of a simple incentive and a token of appreciation that rookies could partner up with the old salts: the Shiny Penny pin. Similar to the Toaster Pin, the Shiny Penny pin would be given schwag-like to the more experienced Rangers as a sign that, yeah, I supported our up-and-coming, newly-minted Rangers with their first shift. It’s a small thing, and I believe that building of culture between Rangers, the ritual of process, and passing on experience after the mentoring process is invaluable to beginning Rangers.

The token of appreciation would be part of their shirt, hat, toaster pin issued package. Perhaps give them two of these pins, so that by their third shift with a bit of experience under their hat, they aren’t such shiny pennies themselves anymore.

The following is provided with each pin:

You are a shiny penny. New, clean, and perhaps a bit nervous. Find a seasoned partner for your first shift and gift them this pin as a token of, “Hey, thanks for walking with me.”