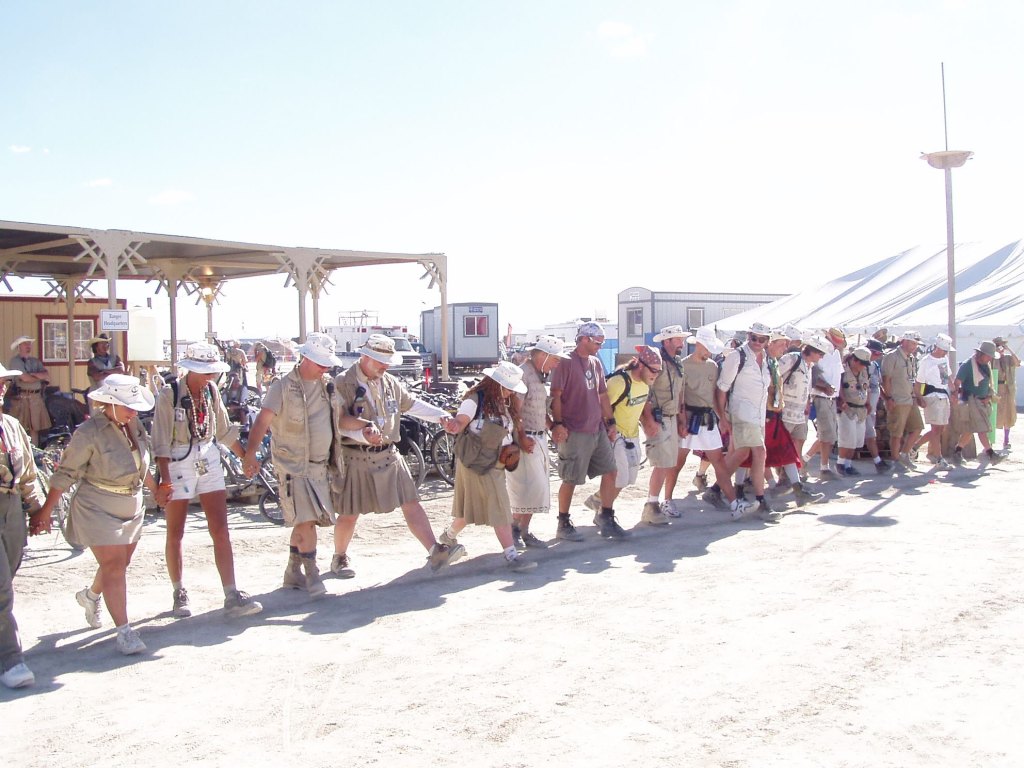 A long time ago, a group of artists, misfits, miscreants, and performers manned the beach in San Francisco around a statue of a man. And then they burned it and they saw their community grow by 100%. What we do is about community. That community grew and grew until it outgrew where they were at. And they had to find a new place to practice their community, to spend time with each other.

This desert was found. That group traveled out here to this desert, and when they got here at the edge of the desert, they were in awe in what they saw. They stopped their vehicles at one of the entrances, they got out, they marveled at what they could create out here. They saw that they could build any kind of community that they wanted out here. And in that moment of silence, there was a need. There was a need for someone to step up and say something. To lead them. And in that moment, Michael Mikel stepped up, took a piece of rebar, and he drew a line in the sand in front of them all.

He said to everyone there, ‘When we cross this line, move into this desert, nothing will be the same. Everything will be different. And it’s up to us what we create.’ That’s the first thing about a Ranger. There’s a need for someone to step up and that’s what the Rangers do. And they do it with theater, with style.

Later, as other people came and got lost in the desert – same guy – Michael Mikel saw that we don’t want to lose anyone out here. So he gathered teams together of people who were well armed, well liquored, and who had been to the desert at least two or three days more than the people who that were lost. And they went out and found them. In the documentation, it says we were Search and Rescue. Nope. They called it, ‘Let’s go play fetch.’ And they went out and found people, they brought them to the camp and built a community that way.

There was a need to do something, Danger stepped up, being from Texas, he called what they were doing “rangering.” Rangering comes from one person taking care of a large area, creating law, creating order, helping order. That’s the other part of the Rangers: you step up to do something, you step up to help, and it’s fun. The idea of a Ranger is that you’re having fun helping all these people. So those are the two main things that are in our lore: stepping up…doing it with style and having fun with it.

Danger couldn’t be here today, but he wanted me to impart two new things. One of them is that things aren’t always what they seem to be. So keep that in mind as you’re rangering. Part of finding out is listening and it may not be what it looks like. The other thing that he wanted to impart to me was that when in the portopotty, put the lid down before you pull your pants down, that’ll keep you stuff from going in the porto. I’m not kidding. I had to write this down because that’s what he told me to say. In other words, still keep it fun in the most solemn of our times. We want to have fun being Rangers.

So now, with the gathered Black Rock Rangers we have here, veterans, we like to invite all you new Rangers to step over that line and when you do, join our community of Black Rock Rangers in taking care of this community, this desert, each other, and all the regional places you come from.

Please step over the line.