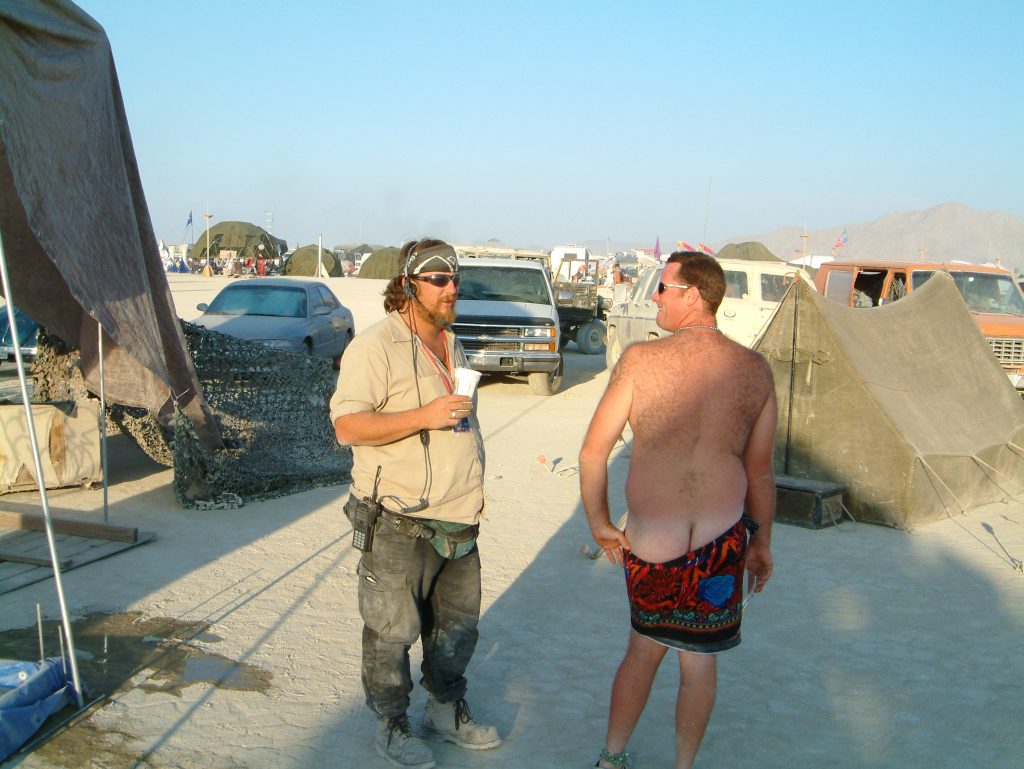 It was in the afternoon on Wednesday, post-event, 2002 (I think) and I was Shift Lead.

I put a call out on Control 1 and asked if there were any Green Dots left on the playa. Luckily we found some and sent them over to the Café to talk to this guy. He was uncooperative, hostile and unstable, but after a little while, he told us his name. For confidentiality purposes here, we will call him “Stanley”. After more difficult conversations, he finally told us where his camp was. We sent some Rangers over there to see if we could find any of his friends. They reported that there was almost nothing left at the address he had given us, but the Rangers there canvassed the surrounding camps, met some of the neighbors and asked about him. As it turns out he was marooned in Black Rock City because all of his friends were fed up with him and had decided to exit BRC without him and leave behind to fend for himself. He had been on one substance or another for many days in a row, and his campmates were completely fed up with his antics and attitude and did not want to ride home with him.

Stanley had no way to leave BRC. He had no desire or intention to leave either. He seemed to enjoy the attention and consistently twisted every conversation and interaction to end up negative. He was a smart kid (and a smartass) and really had a talent for figuring out how to push people’s buttons. This was the only thing that seemed to make him smile.

After some discussion with the other Ranger present, we were unsure of what to do. I was very reluctant to turn him over to the minimal Law Enforcement officers present, as I believed it was our duty to try to do everything we could to care for all participants and to protect them from unnecessary escalation to the local authorities. For lack of another good option, I was beginning to get the impression that we were going to be in for a long haul with Stanley. (With hindsight, the story thus far has become a prototypical scenario, and this is now a common Ranger experience during the post-event period. At this point, however, this was one of the first times I had ever dealt with such a situation, and I was really trying to do the right thing.)

I had to go out to the BM work ranch (about 12 miles away in the Hualapai Valley). I asked that Jynx and Haggis monitor the situation, and step in to support the Rangers currently dealing with Stanley if they needed help. In the course of this discussion before I left, I tried to get these Rangers to monitor a second radio, and they looked at me like I was crazy.

I continued to monitor the radio while I was gone, and Stanley continued to be an ass, consistently managing to piss off everyone who was trying to help him. I got back into the city after about two hours offsite, then checked in. Every time we gave him any slack, he used it against us, and went somewhere else and got in someone else’s way, resulting in another call. Not only that, but we could not honestly say that he was not a danger to himself and others. Nightfall was approaching, and we were resigned to babysitting him in order to keep him out of everyone else’s hair, and because that was our job.

While I was gone, Jynx had spent some time with Stanley and tried to talk with him. This was not fun for either of them. Jynx was triggered by this interaction and made it clear that he was done with Stanley, and wanted nothing else to do with him.

Stanley was treating all of our attempts to help him like it was a game to see whether he could make us mad, or get himself arrested. Nothing we could say or do seemed to make a difference. This began a series of different Rangers taking their turn trying to keep Stanley within arms reach, out of trouble, and out of jail. (There were only about 5 of us still on-playa). Haggis took a long turn overnight with Stanley and was absolutely ready to feed him to the dogs by morning. There was an increasing amount of grumbling amongst the troops about my decision for the Rangers to take care of this guy instead of LE.

Finally, I relayed this story to Danger, and as it turns out he and Dusty were planning to leave that afternoon. They agreed to take him with them to Reno. (There was some talk about “dropping him off in Limbo” which was something Danger had done with others in the past, but he had been judged to be a danger to himself, so we decided he should get taken at least as far as Reno.)

Danger and Dusty finally rode out with him, (we were very happy to see him go) and they eventually dropped him off in Reno. It was later discovered that he had opened Dusty’s purse sometime during the ride, and taken some things.

“All history is current…”

What is past is prologue.